B cell homeostasis and autoimmunity 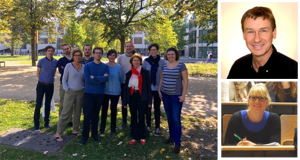 Our laboratory (CNRS-UPR3572) is concerned with the etiology of autoimmune and inflammatory diseases and aims to develop innovative therapies. Within this unit, the team headed by Pr Soulas Sprauel from January 2018 onwards, works on the characterization of mutations in genes responsible for the development of autoimmune diseases such as lupus and interferonopathies or immune deficiencies associated with autoimmunity. The involvement of clinicians of the team, and access to biological data and samples from patients allows the identification of promising candidates. Analyzes of functional genomics in vitro or involving the generation of genetically modified murine models then validate the genes identified and clarify the functional role of gene variants that are carried by certain patients. Autophagy plays an important role in the regulation of inflammation. In addition, gene variants of autophagic machinery have been proposed as implicated in autoimmune diseases. Frédéric Gros initiated in the laboratory, within the team of Sylviane Muller, works on the role of autophagy in autoimmune diseases. We have shown that autophagy is deregulated in the lymphocytes of patients with lupus, which could favor the survival of the self-reactive cells over the long term. Using murine models with autophagy deficient in lymphocytes, we also clarified the role of autophagy in the biology of B lymphocytes. Thus, autophagy is not necessary for the development of these cells, but allows the long-term survival of autoantibody secreting plasma cells in a mouse model that develops lupus-like pathology. Two studies are currently being published. The first one showed the involvement of autophagy in the survival of CD4 + T lymphocytes. The second showed a major role of the ATG5 protein in the formation of the immunological synapse allowing the B lymphocytes to acquire the antigen in order to present it to the T lymphocytes. These two properties could influence the pathological activation of B cells. In collaboration with Prof. Adler’s team (Helmholz Zentrum, Munich), we are now interested in the role of autophagy in inflammations induced by gammaherpesviruses, infecting B lymphocytes. These viruses characterized by a complex life cycle can induce tumors or autoimmune pathologies. Thus, modulation of autophagy in B lymphocytes, a major target of this type of virus, could improve the prevention of associated inflammatory pathologies. This work on the role of autophagy in the homeostasis of lymphocytes during inflammation and autoimmune symptoms is part of the general topic of the Pr Soulas’ team: to try to understand the deregulations of adaptive immunity favoring inflammatory pathologies, in order to target them.