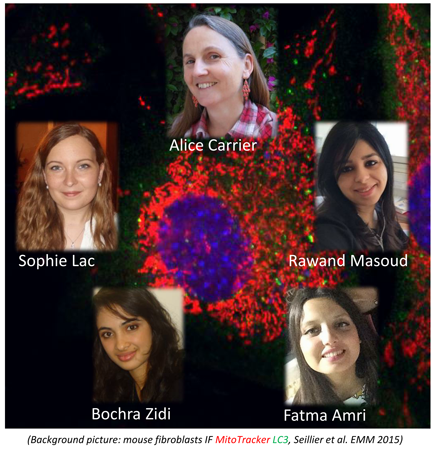 Our laboratory is devoted to the study of cell stress response during pancreatic carcinogenesis to increase the understanding of this dramatic cancer and develop novel clinical avenues.
In this context, my group identified a novel stress response protein, the Tumor Protein 53-Induced Nuclear Protein 1 (TP53INP1), which is over-expressed during stress events including inflammation, both in a p53-dependent or -independent manner. We showed that TP53INP1 protein is lost at early stages of cancer progression in several human tissues including pancreas. Mice deficient for TP53INP1 confirmed its tumor suppressive activity associated with its role in oxidative stress control. This anti-tumoral activity occurs both in the nucleus (through the modulation of p53 activity) and in the cytoplasm where TP53INP1 participates in autophagy. Redox control activity of TP53INP1 relies on its ability to participate into mitophagy, a process that eliminates damaged mitochondria which produce high level of reactive oxygen species (ROS).
Interestingly, TP53NP1 paralog (TP53INP2, also known as DOR) also plays a role in autophagy. Both proteins are involved in metabolic syndrome prevention through their impact on cellular metabolism.
Our current projects aim at:
1- Better understand the role of TP53INP1 in mitophagy to assess its function during aging in different organs: bone-marrow (collaboration with Estelle Duprez’s team, specialist of hematopoiesis, CRCM, Marseille) and brain (collaboration with Lydia Kerkerian’s team, specialist of Parkinson’s disease, IBDM Marseille France).
2- Decipher the dysregulations of mitochondrial metabolism in pancreatic cancer, both at the functional (respiration, apoptosis) and the dynamical level (biogenesis, fusion/fission, mitophagy). Our working hypothesis is that mitochondrial metabolism alterations are targetable and could define groups of patients that should benefit from novel therapeutic strategies.